Mentoring has radically impacted my life – much of who I am and what I do are a result of the mentors that God has placed in my life.  Some mentors were intentional; others were instinctive, but all have been used to make a radical impact in my life.

Mentoring is God’s primary method to develop His leaders.  We see numerous examples of this all through the Bible.  In this series of posts on my blog, I want to briefly look at several examples of mentoring from the Bible.  I hope to challenge you to be mentored and to teach you how to mentor others.

First, what is mentoring? The first time the word “mentor” was used was in Homer’s Odyssey.  In the book, Mentor is a wise man asked to oversee Ulysses’ house while he is away fighting.  Mentor is specially tasked with taking care of Ulysses’ son Telemachus.  Mentor and Telemachus develop a lasting relationship through which Telemachus matures, grows, and succeeds.  This illustration from ancient literature gives us some insight into the significance of the word.

The word “mentor” is both a noun and a verb.  The dictionary definition is “an experienced and trusted adviser” or “to advise or train.”  Here are some ways that other people have defined mentoring:

Mentoring is one of the most exciting and effective ways to prepare people for life and leaders for ministry. 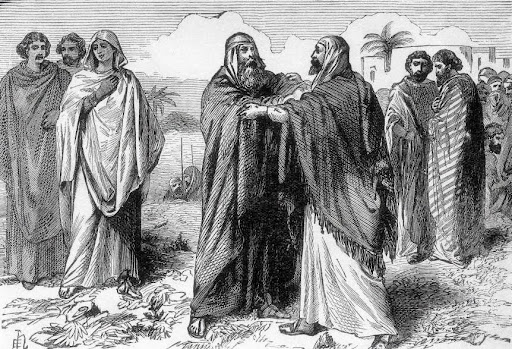 One of the first instances of mentoring in the Old Testament is the example of Jethro and Moses.  Notice several things we can learn about mentoring for their relationship in Exodus 18.

First, the foundation of mentoring is a close relationship (Exodus 18:1-8).

In these verses, we see the closeness of these men.  They greeted one another.  They were concerned about each other’s welfare.  They spent time together talking.  They told each other about what was going on.  No doubt, this relationship had been cultivated over the forty-year period that Moses was a shepherd in the wilderness (Exodus 3:1).

Often, we focus too much on the mentoring and not enough on the relationship.  Without a close relationship built by trust, love, and mutual commitment, mentoring will not work.

Second, the only way a mentoring relationship will work is for there to be transparency (Exodus 18:8).

Moses had a willingness to tell what was going on (“Moses told his father in law all that the Lord had done…”). Moses was willing to be vulnerable.  He was willing to admit fears, weaknesses, mistakes, and concerns. I have no doubt the Jethro was just as transparent as Moses.

Third, the mentor must genuinely desire the best for his protégé (Exodus 18:9-12).

Jethro was very excited about how God blessed and used Moses.  Moses’ victory was Jethro’s victory.  He was happy when things were going well for Moses.  He was just as excited if not more excited than Moses over what God had done for him.  He threw a big feast for Moses, Aaron, and all the elders of Israel.

We need to learn to celebrate the successes of those we are mentoring.  We should be their biggest cheerleader.  Instead of bragging on our accomplishments, we should brag on how God uses them.

Fourth, mentors make positive investments in the lives of those they are mentoring (Exodus 18:13-23).

If we are going to mentor others, we must be committed to positively investing in others.  It is not about using people to build our ministry; it is about using our ministry to build people.  Mentoring only works that way.

Moses hearkened to the voice of his father-in-law!  There were many reasons, he might have not listened:

Moses was known for his meekness and humility (Numbers 2:3).  The fact that he listened to his father-in-law and took his advice shows teachability.  Moses did not think he had arrived or that he did not need any help.

Moses followed Jethro’s advice to the letter.  He hearkened and did all that Jethro said.  He chose able men out of Israel and set up heads over the people.

Often we complain about not having a mentor, but mentoring will only work if someone is willing to be taught!

Why be a missionary – Nathaniel...