Why an indigenous church?

The indigenous church is also the only way we will have any permanence in our work. I can only live so long. I can preach and do the work of a missionary only so long and can reach only so far with my ministry. However if I can plant a local, indigenous church, when I am dead and gone they can still be preaching the gospel to others. While I can only reach a handful, the church can reach more and can train others to do the same. If they kick us out of the country, as has happened in so many communist countries in the past, the way we will continue to have a ministry is by having people trained to do the work.

Finally it should be noted that the church must be indigenous because that is a peculiarity of the Baptist distinctive. As Baptists we believe in local autonomous churches. It has been our history to establish local churches that governed themselves. We have never had a headquarters that made the rules, supported our pastor, or received our money. How can the missionary go to the field as a Baptist and do anything less than a Baptist? As Baptists, no one pays our bills, calls our pastor or makes our decisions. As Baptists, we do things differently because we have that right and privilege as an independent group. We are autonomous. We are indigenous. Make it your priority on the field to establish an indigenous church, just like you have here in your home church.

The indigenous church depends on its leadership. It has been said, “everything rises and falls on leadership.” If we win people, baptize them and help them get a building, what will happen when we leave? Think of what would happen in America if the church were to lose its pastor and were unable to get a pastor. We all know what would be the results and have even seen it with our own eyes. It will surely happen on the mission field and to worse ends.

Explaining the Indigenous Principle
The successful missionary is one who has done his work so well that he is no longer needed in that area. Melvin Hodges

The true measure of success is not that which the missionary accomplishes while on the field, but the work that still stands after be has gone. Melvin Hodges

Kudzu arrived in the United States in 1876 at the Centennial Exposition in Philadelphia! The first recorded “Kudzu Planting” missionaries were Charles and Lillie Pleas. They have a historical marker in front of their Glen Arden Nursery in Chipley, Florida that states; “Kudzu Developed Here!” When the Pleas discovered that animals would eat the plant they began to promote its use for forage in the 1920s.

During the Great Depression the Soil Conservation Service promoted kudzu for erosion control. They gave hundreds of young men the job of planting kudzu through the Civilian Conservation Corps. Farmers were paid an incentive to plant kudzu in the 1940s.
Channing Cope of Covington, Georgia promoted the use of kudzu to control erosion. He wrote articles in the Atlanta Journal-Constitution and spoke on WSB-AM radio. He was very disappointed when in 1953 the US government no longer promoted the use of kudzu.

The problem was that kudzu grows too well. It can grow up to a foot a day (or so they say). In 1972 the USDA declared kudzu to be a weed. The southeastern US has near perfect conditions for kudzu to grow out of control; hot, humid summers, frequent rainfall, temperate winters with few hard freezes, and no natural predators.

Kudzu is fully indigenous to Georgia, the Southeast, and many others parts of the US. The word indigenous means according to Webster’s Online dictionary; “having originated in and being produced, growing, living, or occurring naturally in a particular region or environment.” A synonym is native. If you will go back over this paragraph and consider what you read then you will have an idea of what our goal is as “church planting” missionaries. Today, kudzu is nearly considered a curse. You can’t kill it, you can only try to control it. The pictures should let you see that kudzu is really “native” to Georgia.

As we plant churches we want churches that will be indigenous or native to the area. The term indigenous church has been defined by three characteristics; self-governing, self-supporting, and self-propagating. Though these are not biblical terms you will see their necessity when you begin planting churches and we see them illustrated in the Bible. As you travel, research, and see churches on the mission field you may be shocked. A great number of them will not be able to support their own pastors even though they have been an organized church for many years. 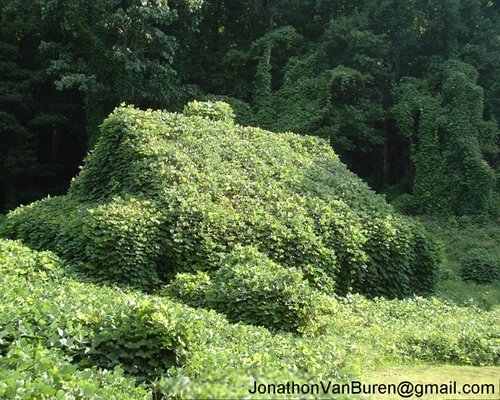 Missionaries, it seems, must stay many years before a church is able to become “native” to the land. They are unable to maintain their churches, pay their pastors, start other churches, effectively evangelize their own people. When the missionary is forced to leave, the funds are cut off, the work dries up, and dies. The only other answer is to urgently look for another source of income and another foreign missionary to prop up the church.

Is it God’s will for His churches to be so weak and dependent on outside support? Can a church be planted that will take on the characteristics of kudzu and become so “native” that it will not need outside help? Will the Bible, the church, the gospel work as well in all cultures as it has in ours?

What would happen if we were to train some national pastors who would have the attitude of Abraham when he said in Genesis 14:23 “That I will not take from a thread even to a shoelatchet, and that I will not take any thing that is thine, lest thou shouldest say, I have made Abram rich.” Abraham wanted God to get all the credit for his success and not a pagan king or anyone else for that matter.

I do not want to promote a position of boasting or pride among the national believers and churches but nor do I want to promote dependency that lasts for years. After having received so much help for so long they become bitter and demanding. They expect you to give to them and if you do not then you are wrong, selfish and bad. They demand, are not thankful, become accusing, and everyone is hurt all around.

In this short study I hope you will learn how to achieve the indigenous or “kudzu” principle. I hope you will at least learn to think, research, argue with yourself until you are convinced of your plan of action as you seek to plant churches for the kingdom and glory of God.

Q&A on the Indigenous Principle

What if a missionary says that conditions aren’t correct for kudzu in their area of the world?

Biblically, we can know that all areas are conditioned to have an indigenous church built there. The command was given to take the gospel to all the world. He would not have commanded us to take the gospel there if He weren’t going to prepare the people and build a church for His honor and glory.

There is however a truth that now is not always the best time to start a church in certain places. The apostle Paul went through many cities on his way to a town where he would preach and plant a church. Evidently the timing wasn’t right at that point. At the very beginning of their ministry notice that they went through Seleucia and Cyprus before it is mentioned that they preached in Salamis Acts 13:4-5. This happens on more than one occasion. I do not understand why he skipped those cities. I do not know how we would decide what cities to skip but I do think that it at least shows us an example of timing or some other reason to come back to a city later.

There were also places that rejected the gospel according to Jesus. He simply told them to shake the dust off their feet and move on to the next town. I am not sure that we will run into that much in today’s world because our cities today are larger than their countries were back then. The attempt had been made. They were unsuccessful and they moved on. Matthew 10:14.

There is also the truth that certain places will be more difficult and take longer. In a “creative access” country where it is against the law to openly preach and witness it is only logical to realize that things will take longer. There will be questions to answer that are not dealt with in open countries. We are not to compare ourselves among ourselves or we are not wise. II Corinthians 10:12We are however to work at doing the job that we know that God has given us of getting His gospel to the entire world.

We must remember that an indigenous church will look differently in the different areas that it is planted. When the indigenous church is planted and takes root it will maintain all of its essential characteristics. It will be the same organism in all basic make up but it will be different in many of the externals. The music style will be more appropriate to the culture, language, and people. The hours of services, the buildings, meetings, etc. will differ. It will be a church. It will follow all the Bible principles but very likely it will differ from our preconceived cultural mores. The missionary must be very careful to plant a church and not a cultural idea of a church.

How can a national church not feel like “takers” or a “welfare church” if they receive offerings to build their church from outside sources?

A plan that worked for us on the field was to teach our people that though we had been recipients of gifts from others we would never be takers. We would always pass the blessings on. We did not loan the church money because the borrower is servant to the lender and I felt that would cause unnecessary bitter feelings. Proverbs 22:7.

I felt that if instead of a loan we could as a church agree to set aside 10% of our offerings to give to other new works then we would have received but would live a lifetime of giving. Our people rejoiced at the idea. We gave away great deals of money. Not out of obligation but out of joy and abundance. Had the church been required to pay the money it could have led to bitterness. Had the church simply taken the money they would have remained weak and never felt the joy of being a giving church. There are ways that we can accomplish the work with great success by simply teaching our people to give.